Firestopping is a physical barrier designed to prevent the spread of flames, deadly gases and toxic smoke through the openings created during building upgrades and the installation of electrical, communications, plumbing, and ventilation systems. These barriers can also fill breaches in fire-resistant walls and floor assemblies.

Firestopping at Alcal can take several forms but is most commonly used for repairing a system through penetration, such as a pipe through a fire-rated wall. Firestopping often consists of workable materials that fill gaps between conduits, wires, pipes, and walls as they pass between rooms.

Alcal is qualified to perform most contemporary firestopping applications. As a certified installer of all leading brands, Alcal has built a reputation for high-quality installations and responsive service. Alcal is not only a trusted source for general contractors but often performs firestop work for other sub-contractors so they can focus on their core products and services 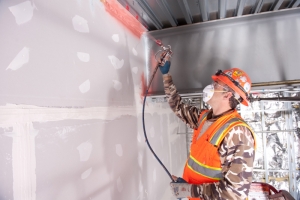 How we work makes a difference